AlgoRepublicWe give brand wings
iOS 16.1 – All you need to know about the newly launched features 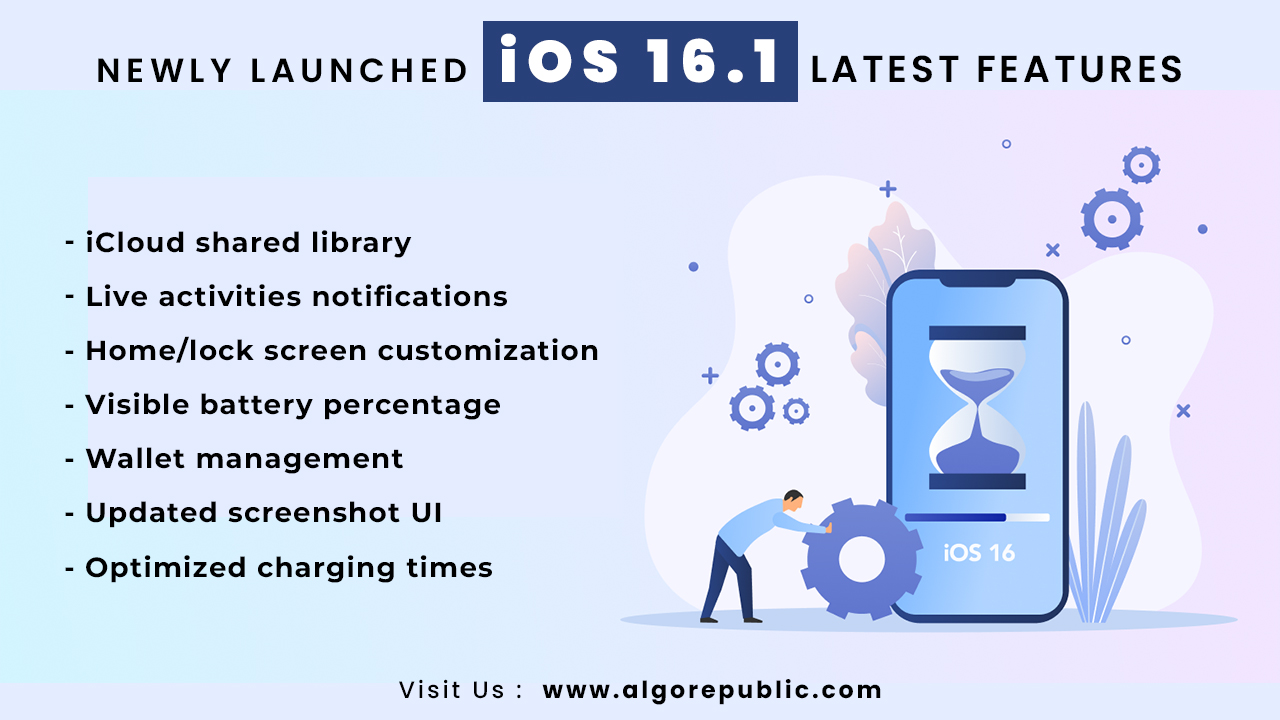 This amazing new feature has enabled users to share their photo library with up to 5 other people. Anyone who has been given access to the library can not only just view the media in the library, they can also add new media, edit the existing or delete the existing ones and the changes will be applied to all devices accessing the library.

Live activities are the notifications of updates regarding an ongoing activity on a third-party application. Suppose you have an uber approaching or there’s a sports event that you are following, your uber status or the score update will keep on showing on the lock screen with updated info.

This will enable developers as well to add live activities features to their apps. However, for now, this feature of IOS 16.1 is limited to just iPhone 14 pro and iPhone 14 pro max. So if you are an iPhone 14 user, be benefited from this feature as you find it convenient.

This feature enables users to toggle on the clean energy charging mode. It modifies and optimizes the timings of phone charging in such a way that your carbon footprint will be reduced. With this new feature, Apple aims to bring down the carbon footprint by reducing and enabling phone charging at times when lesser carbon emission-based electricity is available so that with cleaner energ source, more carbon emissions are not released.

Additionally, it will enable the user to share their personal info like hotel bookings, keys, etc. with their family members and friends in a precisely safe manner using the messaging app.

Before the update, when a screenshot was edited on an iPhone, its further action dialogue box used to be shown on the bottom of the screen which displayed the options to delete, copy or save the screenshot that has been edited. Now, this dialogue box will be shown on the top right corner of the screen with a relatively smaller size so that it doesn’t take up the whole screen and won’t cause any visual distraction. This new interface is an enhanced form of the command.

Get started with the latest IOS updates!

Apple is regularly rolling out the latest IOS updates and it’s about time that you stayed intact with the evolving technology. Get started with the latest IOS 16.1 features to avail the best of the new updates.