AlgoRepublicWe give brand wings
Web3 vs Metaverse: Everything You Should Know 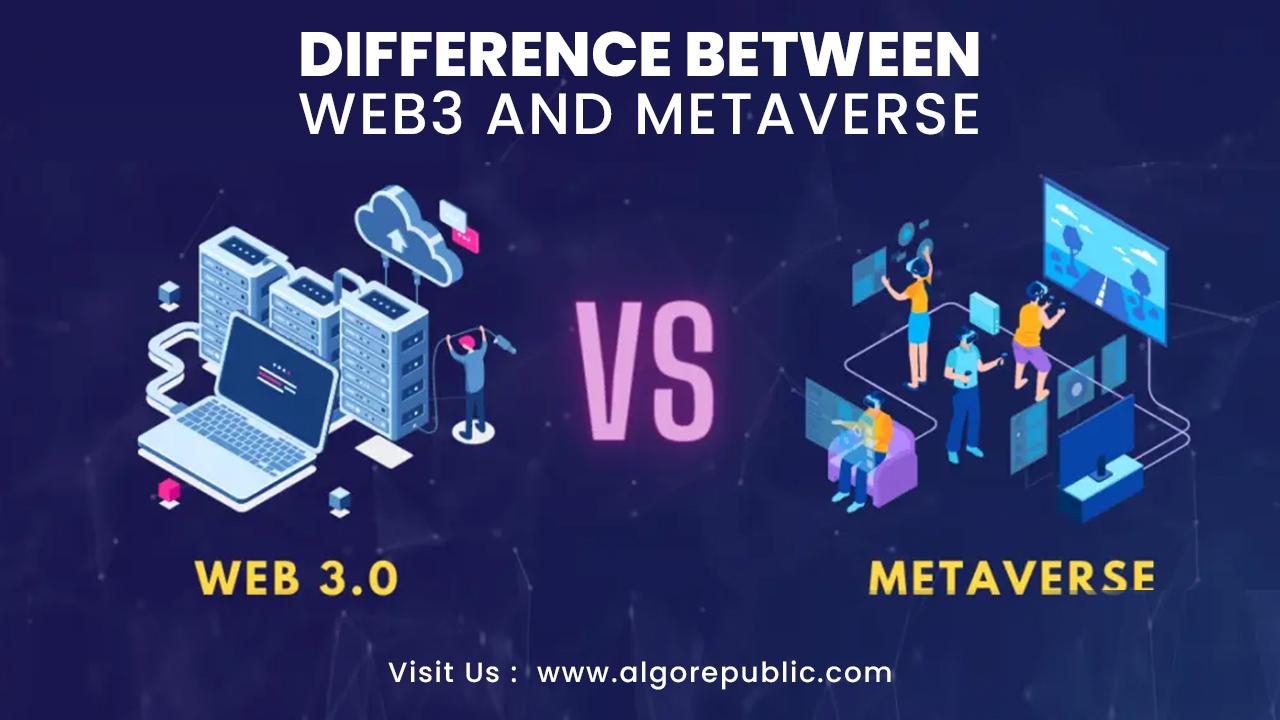 While these latest technology trends might seem like coiled-up terms, they are quite diversified with a highly futuristic approach owing to blockchain research and development. If you are wondering how metaverse comes to differ from the latest web tech i.e. Web 3.0, then give this a read and know everything about the difference that arises in these tech trends that are here to revolutionize the world for the better.

The internet has come a long way from what it was in its initial stages. The “read-only” version of the internet namely “web 1.0” turned into a revolutionary “ read and participate” approach that gave users a bit more freedom to surf the internet and changed the module to web 2.0.

Web 3.0 is basically a decentralized web approach where users can access, store, and share data without having to trust a third party involved in between. From where it all started, where the users were not even allowed to share data just read what was provided, we have come a long way with web 3.0 which gives complete control over usage and accessibility.

At the same time, the metaverse is here to create waves with a completely new virtual world for interaction in the best way possible.

With this freedom, we are now entering the futuristic era of the internet with “web 3.0” and the amazing virtual world of the metaverse. These decentralized approaches are here to change the future.

While both technologies use blockchain development as a base, here are some leading differences between the two technologies which will make them coexist.

Even though users use web3 to utilize the practices of the metaverse. The basic approach and methodology differ. Web3 has its focus on bringing decentralized ownership of the data and a more secure way of transferring data from one end to the other by removing the concept of a third-party involved.

Metaverse, on the other hand, hasn’t got much to do with the owner but the creation of a virtual world where users can connect from anywhere in the world for any purpose with the use of a 3D character or avatar.

The technology bases differ as well. The whole concept of Web3 is derived from the decentralized approach of blockchain development and uses its functionality to offer a permissionless and secure way of accessing the internet.

Meanwhile, metaverse uses different technologies like virtual reality (VR), Augmented reality (AR), blockchain, and the use of interactive interfaces. All this combines to create a purely virtual world for users.

The distinct feature of web3 is that it can’t be owned by anyone and its ownership lies within the users, giving them complete control over the way they are using and accessing the web. Whereas metaverse has the capability to be controlled by a leading entity or company that can take hold of the virtual world. This makes metaverse somehow centralized to some extent however, web3 remains decentralized with a hold of public users over the web access.

Despite some differences, both technologies have a common ground as well. While both, metaverse and web3 have a base of blockchain technology, it is safe to say that metaverse only exists because of web3. Being a core component of the web3, metaverse came into existence with web3 and can’t be accessed without it.

It will not be wrong to say that currently, we are entering the era of a technology revolution just like the one we entered when web 1.0 first introduced that pathway of the internet world.

Now this revolution is being brought by web3 and its core component i.e. Metaverse. Utilizing progressive blockchain research and development, these technologies are sure going to take over the world by their feet.

Being the top software development company, we have a key focus on blockchain development. Get started with a futuristic approach today.